thanks
Posted by team_galloway sled dog racing No comments: 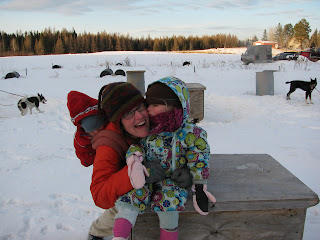 "Yes we can!” At our house Bob the Builders (anyone else have a 2 1/2 year old?) anthem of being able to achieve goals and challenges became our motto as we juggled being new parents of a beautiful baby (Sylvie Lynn born May 2008) and of course our beautiful Wren (born May 2006), working our non profit jobs and maintaining a competitive kennel.

We entered the Beargrease 150 with one team this year and were able to pull of a second place win and the Best Cared for Team award! The race was fast and very competitive with 32 teams competing. Mug ended up with a cramped shoulder muscle but besides that every dog came through healthy and happy with tails wagging at the end. This was August’s first time away for the night from baby Sylvie but baby was well cared for by a group of our amazing family and friends. 20 specific fans of Team_Galloway awaited us at the finish line! How fun was that?!!

The Midnight Run in the UP of Michigan was also a very competitive turn out, again with over 36 teams and this year a new trail to run on. We came in with a third place finish and despite our newbie Tuck pulling out of his harness and giving Don a chase on the trail for awhile….we were very pleased with the dogs performance.

The Red River was the highlight...this race is just plan fun and a great capstone to our season. Don gave our friend Harry Lambirth (whom we got our first sled dogs from 9 years ago) a 10 minute ride down the river to retrieve his lost team and received not only 1st place (2nd year in a row) but also the Sportsmanship Award...the first time that our team received this recognition
Posted by team_galloway sled dog racing No comments: 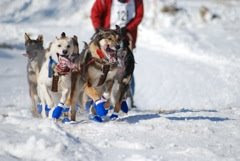 Why do the dogs wear boots on their feet?

We put cloth (cordura) boots on the dogs feet to help protect the webbing between their toes from getting what musher's call “fissures” or splits in their skin caused by ice crystals of cold fresh snowfall. Also the boots protects the dogs feet from getting snowballs forming in the hair and from ice or frozen gravel on the trails that we run on. The dogs generally like their booties...once we had a dog (Song) who liked booties so much he ate 20 boots during a race! We know this because we counted them in his poop afterwards.
Posted by team_galloway sled dog racing No comments:

Follow along as our athlete's compete for glory and doggy snacks 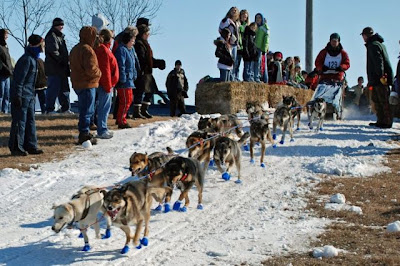 This racing season was another record year for Team Galloway placing well in the Beargrease 150, Mid-Night run and the Red River Dog Derby. Don't miss out on an opportunity to be a part of Team Galloway for the 2009-2010 racing season.
We would be proud to list you as one of our sponsors for the upcoming season. Let us give your business exposure throughout the racing season as we travel to races and speaking engagements.
Your logo could be prominently placed on clothing, our truck and in media write-ups. Don't miss out getting your business logo placed on our dog box, patches sewn on the sled bag and jackets, website etc.

If you have questions please Email us for more details.
Sponsor Checks can be sent to:
Team Galloway
5180 Farmers Road
Makinen, MN 55768.
Keep an eye on the web-site for updates on training, races, appearances and more.
Posted by team_galloway sled dog racing No comments:

Trail is great for racers, By John Pepin

WETMORE — In an exciting finish, Minnesota’s Don Galloway won the Midnight Run Saturday for the second year in a row.Spectators cheered as the frost-covered faces of Galloway’s orange-booted lead dogs could be seen rounding a corner through the cold early morning darkness in Wetmore.With temperatures sunk to near 10 degrees below zero, Galloway of Makenin, Minn., crossed under the wooden arch and over the blaze orange finish line painted in the snow at 7:24 a.m.“It’s great,” Galloway said. “I won last year so it’s fun to come back and be able to retain the title.”The mushers race 49 miles to a layover at Deerton in Alger County before continuing on another 42 miles to the Wetmore finish line, located just south of M-28 about four miles east of Munising.Galloway said his eight-dog team performed well. Temperatures were cold and the trail was hard and fast. There were a couple of icy hills near Marquette, but the rest of the trail was good, he said.“The dogs were just awesome, and they’re what it’s all about,” Galloway said. “They were dog-o-mite.”
Posted by team_galloway sled dog racing No comments:

Here is a nice article by Andy Greder of the Duluth News Tribune published Tuesday, January 29, 2008. It's a great article. That got national press.

To be a responsible, positive, competent, and competitive team representing the best of Minnesota mushing.

To have the team finish each race healthy, happy, and wanting to continue.

To challenge ourselves to continue in the face of difficulty and in spite of hardship.

To share the love of mushing and the bond formed between human and animal to children of all ages.

To contribute back to our community.